So last weekend Melbourne celebrated its annual White Night. White Night is a cultural arts festival of light installations, music and dance all over the city of Melbourne for which about 600,000 people attend for free from 7pm-5am. The installations include moving projections over the entire face of landmark buildings all around the city. Throughout the city you could watch Brazilian marching bands, acrobats, interactive lit up dance floors, and even pole dance stage performers! It’s a pretty unique experience, and come early next morning you’ll see people fallen asleep in all sorts of strange places around the city.

General reviews of this year’s celebrations were that it was significantly tamer than previous years, which essentially is a negative. They mainly attributed this loss of wow-factor to the missing building projections down Flinders Street which were usually lit up impressively. However, I will add that having been out last year for White Night, I felt that the festival was drawing too many people and that the walking traffic congestion in some parts of the city created some public safety hazards. This year, I felt the greater presence of police which patrolled the city in large groups of a dozen, saw the clearly marked First Aid and Lost Children stands, could easily find more than enough porter potties, as well as greater variety of foods to feed on Bourke St, which was lined with Food Trucks – they even had glowing neon ice-cream! All-in-all I would say that I felt safer and less inconvenienced, which was my main issue last year.

I have some videos below, but they won’t be of great quality since my iphone 6 doesn’t take great footage so late at night with little light. Even so, I highly recommend this festival as being one of the most worthwhile events, if not most worthwhile event, visiting Melbourne for.

National Gallery of Victoria’s Twinkle Stars. People ran up to catch them.

My hubby used his ninja skills to run up and grab me a star. Now I can make a wish! 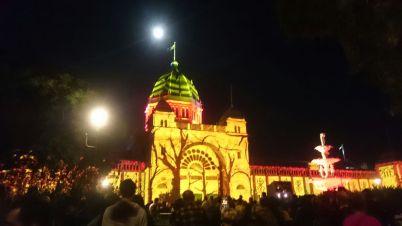 Me the morning after. So tired!